Active Aging and the Benefits of Learning New Skills

I recently held a Winter Olympic Senior Games event at Trillium Woods Senior Living Community in Minnesota. Over 65 residents ages 65 to 94 participated in a variety of events, such as chair volleyball, water volleyball, trivia, Wii skiing, shooting hockey pucks, competing at ping pong and billiards and building a snowman. One of my favorite parts about most of these events was that most of them didn’t require instruction or coaching from me in regards to proper techniques.

However, shooting a hockey puck was much different. Only a select few had ever picked up a hockey stick in their lifetime. Little did I know upon arranging the activities that I was setting myself up to teach seniors how to shoot a hockey puck into a net. (And not just a regular net, but  into a net with a goalie tarp attached for accuracy!) 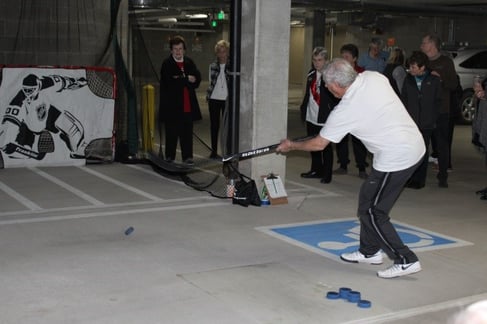 The first practice was alarming, I think for both residents and myself.  I first explained and demonstrated the proper way to hold the stick, how to draw the puck back while always keeping the blade on the floor until the release, and following through to release the shot.  Easy for me, I have been doing it since age 4 and can do this better than anything. Many who chose to give this a shot were golfers, so it shouldn’t have surprised me when they picked up the stick. Their full swing included picking up the stick (holding at the top, not like I had demonstrated), winding up (taking the blade off the floor, not like I had demonstrated) and then failing with follow through to get the puck where they wanted it to go. They wondered why the puck responded the way it did and assumed that the way to fix their technique was simply by getting closer to the net.

So, with each resident I assisted getting them in proper position and instructed in detail each part of how to hold the stick, and how to draw the puck back and release the shot. Each resident was a little different, in how or what I had to explain. Believe it or not, while some needed more practice, everyone improved! Once they had the swing down, we moved on to teaching them how to lift the puck.  Slightly more difficult, however a select few were able to grasp this concept in the short four weeks we had to practice.

Many would never think that at age 94 I am going to learn how to shoot a hockey puck, but that is what is so great about our brain and body. We can challenge ourselves in many ways allowing our brains to make new connections, and our bodies will adapt to different environments we place ourselves in. We are all able to learn a new skill, task, or sport at any age in life; much of your success is based on your mindset and effort given on a task. Take a look at this article on older adults and their ability to catch on and learn something new. Age is no excuse to remain complacent. What type new of activity, game, or task will you teach your residents? From my experience, I think both residents and instructors will enjoy the experience. Plus, these type of activities could improve your senior living fitness program! What new skill can you challenge your residents to learn?