Fitness through the Holidays 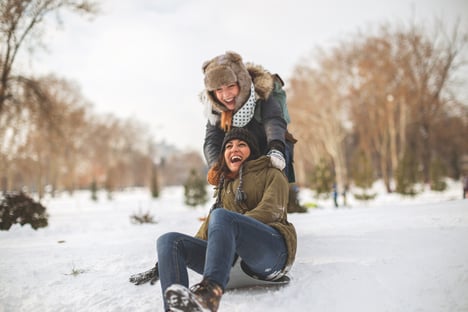 The holidays are always such busy times! Managing all the things from day to day tasks, much less the extra holiday parties, celebrations, decorating, shopping, etc. Many times people decide to skip  workouts or cooking at home to make time for holiday activities. You shouldn't forgo your normal routine and it's best if you try to maintain some normalcy when it comes to your exercise routine and eating healthy. Take a moment to pause and incorporate even just 30 minutes of activity that includes the whole family.

One way to manage your time between celebrating and exercising is to choose an activity with friends and family that involves exercise. There are a lot of festive activities that involve activity. Ice skating as a family is great exercise and can be done indoors or outdoors. During a snow fall, you can shovel and offer to help neighbors who may not be able to. Involve the whole family in building a snowman or snow fort to burn energy. One of the best snow activities is going sledding. Climbing those hills is not only a great leg workout, but also a cardiovascular workout.

Fortunately, there are a lot of indoor activity centers. If you belong to a gym or club, you can certainly use their facilities to do a traditional workout, play basketball or even swim as a family. Many area high school pools also offer open swim time.  Trampoline parks have become a trend for family fun and instead of watching your kids jump, parents can join in on the fun. It’s quite the workout to jump for an hour, just use caution! Check out other options in your town such as laser tag, rock climbing, indoor batting cages and indoor playgrounds. Most of these involve a fee but if you plan ahead you can often get group discounts and coupons to make it affordable.

Don’t have time to plan ahead or need to save time? Create games and workouts at home. If you have stairs you can all walk or run up and down the stairs and do an activity at the top and bottom to create your own workout. Turn up the music for a family dance party and take turns choosing your favorite songs.  The possibilities are endless, just think like a kid and use your imagination, or simply let your kids choose the activity!

Instead of grabbing food on the go, involve your kids and make it part of family time. Make your own pizzas at home and everyone can vote which is their favorite. Make a healthier Christmas cookie recipe together. There are great recipes that minimize processed sugars and flours. Allow your kids to pick the meal if they help make it. These are all ways that you can still spend family time together without disrupting your healthy eating.

The most important thing is to keep up as much of a routine as you can. If you are used to exercising and eating well then you should keep doing it as much as you can through the holidays. You can certainly take a break but don't disrupt your routine, make the holidays about friends and family, but you can also maintain your health as a priority.

Whole Grains as Part of a Balanced Diet

Whole grains have been advertised as being part of balanced diet for as long as I can remember. Specifically, bread and cereal companies are careful to emphasize their importance as a quality source for whole grains in their marketing messages. So, why are they so special and why are they essential for a balanced diet? I will get to that in a second, but first, let’s start with what is considered a “whole grain.”

The processing that a grain goes through is what determines whether or not it can be considered whole. When a grain is processed it is stripped of most of its outer shell and other nutrient dense components, leaving just the starchy inner layer that does not have  significant nutritional value other than acting as a carbohydrate.

The anatomy of a whole grain has three important components to it, which include the bran, the endosperm, and the germ. All of these different parts have unique health benefits to them and they all need to be present for the grain to be considered whole. The outer layer of the grain is the called the bran and it is chewy and fibrous. It contains a large amount of fiber and other nutrients such as antioxidants, iron, zinc, and B vitamins. The next part of the grain is the germ, which is the base for growth for each whole grain kernel. Antioxidants, healthy fats, and B vitamins can all be found inside the germ. The last part of the grain is the endosperm. The endosperm is the soft and chewy middle part of the grain that is left over after the germ and bran have been stripped away through the refining process. This only has a small amount of minerals and B vitamins and mainly acts as a source of carbohydrates.

Grains that have all three components (bran, germ, and endosperm) can be considered a whole grain. If it’s missing one or more components, then it is considered a refined grain. An easy example would be brown rice and white rice. Brown rice is a whole grain because it is still covered by the bran and has the germ intact, making it more fibrous and tougher to chew. White rice is a refined grain because it has had the bran and germ removed leaving just endosperm which is soft and easy to chew.

Whole grains can also be protective against type 2 diabetes; because whole grains are low on the Glycemic Index they do not cause your body to release a surge of insulin when eaten, rather they cause a steady release of insulin. The nutrients and fiber in the whole grains also help with insulin sensitivity which greatly help to reduce blood sugar spikes.

Health Bonus: Whole grains can also help with digestive health. All of the fiber and other nutrients in grains can help with healthy bowel movements and reduce the chances of constipation.

With all of these health benefits and disease fighting properties, whole grains should become a staple in your diet. Start to reduce your intake of refined grains and start looking for grains that labeled as being whole, such as: whole wheat bread, brown rice, and quinoa. Your body will thank you!