Weight training for women has a common concern: engaging in resistance training may lead to “bulking up” or gaining significant amounts of muscle mass. But this is simply not the case. More likely, it will lead to weight loss. First, I’d like to discuss the basic physiology of women that significantly debunks this concern. Imagine a healthy adult male specimen with an ideal amount of muscle mass. Compare that to a healthy adult female specimen. I’m sure most of you are imagining that the female is overall slightly smaller and has significantly less muscle mass than the male. What other differences are there between the two specimens? They have different reproductive systems. The male reproductive system, more specifically testosterone, is completely necessary for building significant amounts of muscle mass. Testosterone is an anabolic substance; without it, the human anatomy is dramatically less efficient at building muscle mass.

Taking this into consideration, here’s another scenario. This time, instead of adult male and female specimens, imagine prepubescent male and female children engaging in an identical resistance training program. Theoretically, both children should have similar responses and gains from their training because neither is producing significant amounts of testosterone. Now imagine those same children of similar size and health entering puberty and continuing with their training. Along with the mood swings experienced with the influx of hormones, the male specimen brings testosterone into the equation. As these children continue with their identical resistance training programs, the male should begin building significantly more muscle mass and at a much faster rate, while the female experiences a response to the resistance training similar to the response she experienced prior to puberty.

I’m implying that if women engage in the same resistance program as men, it is very unlikely that they will experience the exact same response as men. That being said, I am also a firm believer in genetic individuality; certain individuals’ physiology may differ slightly compared to the usual. Although men typically produce more testosterone than women, women do still produce a lesser amount of testosterone from the ovaries and adrenal glands. It’s more than reasonable to assume that a certain percentage of the female population might produce higher than average amounts of testosterone. Although this is possible, it’s also certainly not the norm.

It’s also important to keep in mind that muscle mass is a dense material and weighs substantially more than fat. Taking this into consideration, the scales won’t necessarily show the results at first. Stay patient and determined, because over time you will notice a physical difference.

Here are some more reasons women need strength training, and more thoughts on why the ultimate goal of weight training isn’t always bulking up, but can instead be a boost to women's health. 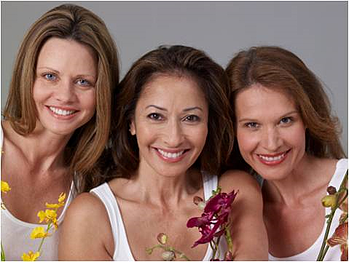 It’s about that time of year where the weather is getting warmer and the flowers are blooming. May is a wonderful introduction into the summer months and is also a time we celebrate women. Mother’s Day is not the only day to celebrate women, but there is a whole week dedicated to women’s health. For this year, National Women’s Health Week for the US is May 11 – 17. Women can celebrate the generations of women before them that have pioneered the way and take charge of their health to make it a priority. This week focuses on preventive measures to take to improve their health and avoid disease.

Within this week, there is a day designated that women encouraged to visit their health care provider while getting recommended check-ups, vaccinations, and screenings. The National Women’s Health Check-up Day is May 12, 2014. Maintaining annual screenings and check-ups is one important way women can take control of their health and create a healthy lifestyle. Other healthy habits include getting regular physical activity, adapting a healthy nutrition routine, avoiding smoking, and following other general safety rules.

Sometimes it can seem like a lot to take in regarding our health. It’s do this, don’t do that. Follow this guideline, avoid this. Even though our health can be challenging, it’s important to know what we can control and what we can’t. One part of taking charge of your health involves understanding your risk factors. Some risk factors are beyond your control which includes family history of disease, your sex, age, or having an existing health problem. Ones you can control are diet, fitness, use of tobacco and drugs, alcohol intake, and even wearing your seatbelt to name a few. In the US, there are about 35% of early deaths that could be avoided by quitting smoking, having healthy diet and increasing physical activity. Make yourself more aware of how you can prevent early death.

To celebrate women’s health week, make time for yourself to schedule your appointments to take care of you.  I encourage you to take time this week to try the following activities: