The Transtheoretical Model (TTM) takes place every day in everyone’s life. It’s up to you, though, to move up the ladder on that model and make a healthy lifestyle change. The TTM is based on six stages. There is another stage that doesn’t appear on the model that people talk about, but we’ll get to that later.

The stages of the TTM in order are the following. 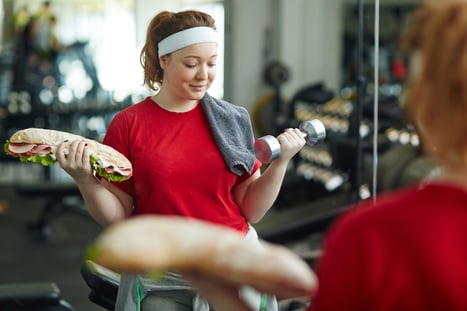 This stage is where someone doesn’t see themselves changing within the next six months. Nothing will motivate the individual to become healthy at this point. This becomes a problem because some of these people are underinformed or not informed of what risk factors they are carrying. These people are just unmotivated and very resistant about talking or doing anything else that will essentially help increase their quality of life.

Contemplation is where individuals are ready to start exercising and realize that they need to make a change in their habits. These people want to take charge of the situation within the next six months because they understand the benefits of healthy living and that they need to decrease their risk factors in order to increase their quality of life. With that said, people start to do some research to figure out the costs involved in becoming healthy. A fair amount of people tend to stay in this stage due to the costs involved. These people are individuals who don’t have a lot of money to spare. So people tend to get stuck and go into what is called chronic contemplation.

Preparation is the stage in which people will be ready to start making a change within a month. These people are individuals who have purchased workout equipment, joined a gym, talked to or made an appointment with their physician, and have bought other necessary essentials to get off to a great start. These individuals are very serious about change and take the right steps to be well prepared for it.

The action stage is where people have made several changes to their lifestyle within the last six months that have significantly reduced the risks of disease. This stage is one of the most important stages because six months can determine whether an individual wants to achieve more, or it can be that breaking point in which that person decides to quit altogether. This is known as relapse.

Relapse is a stage that anyone could hit. People will stop what they’re trying to achieve because their mindset is that they’re missing what they used to have, and what they’re doing is taking up too much time or is becoming difficult. In this case, exercising got too hard to complete. This usually happens within the first three months.

I myself have seen this occur when something unfortunate happens in someone’s life. These unfortunate events include loss of a job, loss of a loved one, not enough time in the day, exercise is not motivating anymore, and so on. Of course those things make you unmotivated to do anything. I get it, but when quitting anything, there are consequences. When losing a job, you’re out of a job and have no income. With no motivation, you tend to eat more and exercise less. Relapse can also happen after the maintenance stage. Someone might just want to take a break after getting into great shape, and then they’ll slowly go back to where they started.

Maintenance is where people have made a lot of changes in their lifestyle and are working even harder to maintain what they’ve been doing so that they don’t end up relapsing. People in the action stage are far more likely to relapse than someone in maintenance. The maintenance phase can last an estimated six months to five years. What people tend to do within that time is build up more confidence in order to make sure they are consistent with exercise and keeping away from poor habits. So although the action stage is the more likely time for someone to relapse, it’s still important for people to realize that a single craving and action to cater to that craving is more likely to happen at 12 months rather than five years.

This stage is a good stage in which to be. Termination is where someone is 100 percent into what they are doing and they don’t want to change because of the benefits of what they’re getting out of their choices in life. They are driven and confident individuals who don’t want to go back to what they once had where nothing motivated them (the Precontemplation stage).

It’s up to you what you want to do with your life, but remember that one decision can change everything. Make your weaknesses strengths, get involved in your community, exercise with a friend or spouse to help you stay motivated, and talk to your doctor, a counselor and a personal trainer to help get you on the right track to a better life.

Start the New Year right and set some goals and get started!

New to our blog?  Subscribe and get them straight to your inbox.

What Exercises Should I Do?: Guidelines for Senior Fitness (Part 4)

In my first, second, and third blogs of the series, I went over five of my guidelines to being successful in senior fitness:

In this fourth and final blog of the series, I discuss one more guideline:


Don't Change Exercises; Change the Intangibles and Variables of the Exercise Certain exercises, such as the sit-to-stand and the seated row, should always be performed in one's routine. Certain experts recommend that one would eventually replace these exercises with a new one. The reasoning behind this is that it is believed that over time the muscles will grow accustomed to certain exercises and the effect will be lost. While this is slightly true, it's not true because of the exercise itself, but rather the variables of the exercise, such as the sets, reps, rest periods, tempo, etc.

By changing these variables, the CCRC resdient client will always have results and will continue to perform exercises that work the entire body in unison, such as the exercises in the preceding blogs. As a result, they will increase their performance in the daily activities of life.

After all, the more something is changed, the less that person will be good at it. If you want to get good at throwing a ball, you spend your time throwing a ball and not catching a ball. Well, the concept is the same with exercise. Constantly changing the exercises on someone will possibly give them results, but the question isn’t, "Is this person getting results?" Rather, the question is, "Is this the best way to do it?"

So, constantly changing the exercises may elicit a result, but we are looking for the best results; therefore, mastering and being consistent with basic, compound, multi-joint, closed-chain movements will help gain strength, increase lean muscle weight, increase mobility, work the body in unison, increase neurological activation, and lead to greater overall success.