This blog was written by Sean Holbrook. Meet our blogging fitness specialists at the NIFS website.

A month ago I wrote "Wii Fit and Wii Sports: Why They're Good for Senior Fitness," which covered the benefits of the Nintendo Wii to increase physical activity among seniors. That blog set off the proverbial light bulb in my head and made me wonder how could I incorporate Nintendo's Wii into senior fitness classes at my Continuing Care Retirement Community. 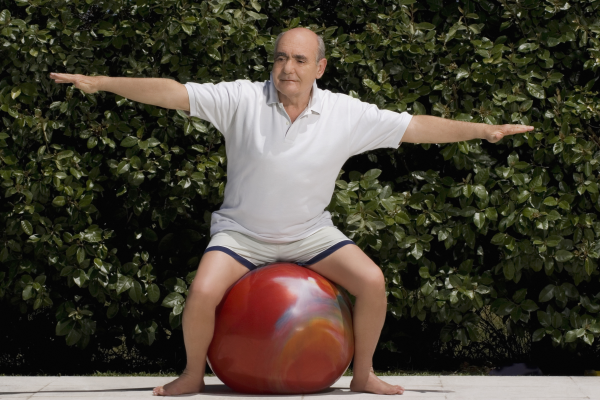 I had originally planned a four-week balance program with a three-month follow-up using the Fullerton Advanced Balance (FAB) test to be launched the following month. But I came up with a way to incorporate the Wii Fit to use the initial body test on the game as one of the pre- and post-test measurements for the program. Along with using the Wii Fit body test, participants performed a baseline assessment using the FAB test.

Based on their performance in the baseline assessments, participants would be set up with personalized exercises that focused on one to two specific areas pertaining to their balance that needed the most work. The most common areas were lower-body weakness, center-of-gravity control (standing and dynamic), vestibular impairments (inner ear), and poor use of vision.

Along with individualized exercise programs, participants were encouraged to use the Wii Fit and play balance games to become more aware of their center of gravity and work on their center-of-gravity control. The most popular balance games used during the program included ski jump, lotus focus (using it with tandem and semi-tandem balance stances), snowboard slalom, and ski slalom.

It has been about six weeks since the program began and many of the participants have begun their four-week assessments. I'm happy to report positive results. At the four-week assessment, 80 percent of the participants have shown improvements over their FAB baseline tests. The most common areas of improvement have been lower-body strength and center-of-gravity control. The participants are scheduled for a second three-month follow-up, which will give them adequate time to see significant changes in their balance and on their scores in the FAB test.