This blog was written by Sean Holbrook. Meet our blogging fitness specialists at the NIFS website.

Both are easily passed off as nothing, but this is just how Parkinson's starts. This degenerative central nervous system disease eventually leads to difficulty walking and talking, and even cognitive function. 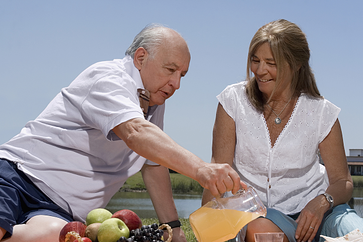 A new study by the Harvard School of Public Health shows that men who ate a diet rich in foods containing flavonoids were 35 percent less likely to develop Parkinson's disease. Researcher Xiang Gao stated that the study suggests that a group of flavonoids known as anthocyanins may have a neuroprotective effect.

The study looked at the responses of 49,281 men and 80,336 women who participated in the Nurses' Health Study. Participants were followed for 20 to 22 years and filled out food questionnaires. The researcher calculated flavonoid intake based on the responses of five flavonoid-rich foods, including tea, berries, apples, red wine, and oranges/orange juice. No real link was identified for women, but both men and women who ate the most foods rich in anthocyanins, berries, and apples had a 22 percent lower risk of Parkinson's disease.

Antioxidants and Balanced Diet Limit Risk for Many Diseases

The benefits from a healthy antioxidant-rich diet full of berries, citrus fruits, teas, and even chocolate are well known because of their ability to prevent cardiovascular disease, several types of cancers, premature aging, and the list goes on and on. This study does not prove that berries or a diet rich in antioxidants will prevent Parkinson's disease. This was an observational study that lends more support to the fact that eating a well-balanced diet and making healthy lifestyle choices can be a limiting risk factor later in life.