Senior Living: How to create a win when your programs and events flounder

Programs and events don't always turn out like we plan. Sometimes we misjudge interest, and sometimes we misjudge the timing or venue. In other cases, the program is well done, but we don't meet our goals because we didn't set the right target to begin with. We're managing close to 30 client fitness programs in senior living communities, so we're bound to miss the mark on a program here and there. What's important to me is that we learn from our missteps so that the next time we offer an initiative, it's a more complete program.

If you're looking for ways to continuously improve what you're offering to residents, check out our insights on a few programs below. For more on our process of goal setting and evaluating the programs we run, check out this blog. 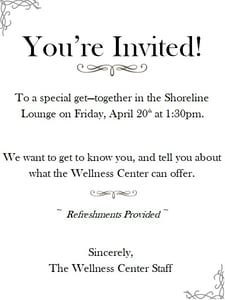 The Program and Goals:

Last April, Tim hosted a membership campaign to attract residents who were not members of the fitness center to join. Goals for the initiative were simple, as was the overall structure of the program.

The fitness program at this client community is well-established with about 67% of the eligible residents already members of the fitness center. They regularly gain about five to six new members each month, so the focus of this program was a targeted outreach to long-standing residents who had not yet joined the fitness center. Tim believed that if he could get them in the door for orientation by lowering the barriers to joining AND inspire them to attend at least one group fitness class during the month they joined, those new members might be more active/engaged in the long run.

Tim set up "open orientations" for the month to create easier opportunities for non-members to attend. Despite issuing personal membership packet invitations to each of these residents, no one attended those orientation sessions, nor were any of the membership packets returned. While they did pick up five new members in the month, they all came from a pool of newer residents who had moved to the community recently. And of those five who joined, only one attended a class during April.

Sending invitations by community mail to non-members didn't generate a response, so future membership programs need to enlist a different outreach approach at this community. It is worth noting that we had a strong positive response to this very approach at a different client community. So if you operate multiple venues, you may need to adjust your approach per location.

The Program and Goals:

To capitalize on the winter games, Alyssa ran her own version of the Olympics for the residents in her Minnesota community. Her goals were tied directly back to fitness center membership and participation:

Alyssa was able to achieve the total visits goal (1,705 visits in February 2018) and the membership goal (5 new members gained in February 2018). But she didn't reach the goal focused on frequent visitors (5+ or 8+ visits per month).

While Alyssa was quite successful at using her Olympics program to get a lot of people to use the fitness center, many of the elements of the program did not promote repeat visits. Additionally, many of the events occurred outside of the fitness center. (Click here to read Alyssa's reflection on teaching the residents new skills during her Olympics program.)

In reality, the program itself was strong. But the goal focused on increasing frequent fitness center visits was probably the wrong aim. Future offerings like this that aren't specifically targeted to draw members into the fitness center will be created with different program goals in mind.

Want to find out more about how NIFS can provide this kind of smart, strategic programming to your residents?